Byzantine Museum of Chios was created in 1980 and is located close to the main city square (Vounaki square).

Even the building of the museum is of great interest. It is a former Ottoman mosque, called Mecidiye mosque and was built in the 19th century by sultan Abdul Mecid. The mosque as a monument and the exhibition of the museum coexit and compliment each other.

During the years 2006 to 2010 the museum remained closed due to repairs being made on the building. During this period, its archaeological exhibition was re-organised.

There are early Christian and Byzantine sculptures exposed at the museum yard but also from the Genoese and Ottoman period. There are also Jewish tombstones and canons of the 17th century, made ​​of iron and brass.

At the main exhibition room of the museum, the visitor can find inscriptions, pottery and folk art, miniature, wood carvings and sculptures of the early Christian, Byzantine, Genoese period. There are detached Byzantine and post-Byzantine frescoes, too.

Some of the most popular exhibits are: A post-Byzantine fresco of the miracle of St. Nicholas, a work of Michael Chomatza Anagnostou (1734), from Panagia Krina church. A replica of the painting by Eugene Delacroix "The Massacre of Chios". Two marble lintels of the Genoese era, of St. George. 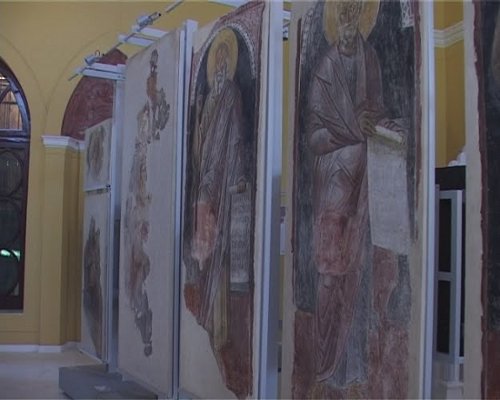