Nea Moni ("New Monastery") is an 11th century monastery on the island of Chios that has been recognized as a UNESCO World Heritage Site. It is located on the Provateio Oros Mt. in the island's interior, about 15 km from Chios town. It is well known for its mosaics, which, together with those at Daphni and Hosios Loukas, are among the finest examples of "Macedonian Renaissance" art in Greece.

Nea Mone was built between 1045-1056, in order to honour the Assumption of Virgin Mary. It encompasses the main church, two smaller churches, the dining room of the monks, the monks’ cells and underground water tanks that were intended for the storage of water. In the southwest part of the monastery there is an imposing defending tower. All the areas of the Monastery are encircled by high stonewalls.

According to the monastic tradition, the Emperor Constantine Monomachus financed the Monastery as he wished to thank three Monks from Chios who had predicted that his exile on Lesvos would be temporary and that he would in the end take over the throne.

The Emperor Monomachus and Zoe Porphyrogennete conceded to the Monastery a number of properties and sources of income, which was very rare for the Byzantine economic system.

The Monastery of Nea Mone was one of the richest and most famous monasteries in the Aegean. Its peak continued till the time when the Turks invaded the island in 1822 and looted the Monastery, and it is since then that economic deterioration began.

The other buildings that are within the borders of the walls are:
The church of Aghios Pandeleimon, a small church to the right of the road that takes to the tower.
The Museum, the exhibits of which are items taken from the Monastery, became available for the public in 1992.

The church of Ieros Stavros, a small church built next to the gate, that serves as the reliquary for the bodies of martyrs and of those who fought during the massacre of Chios.

The Mosaics of Nea Mone are dated back to the 11th century and constitute heirlooms of the Monastery. Today they are one of the three unique collections of the Byzantine period in Greece that have been preserved and are in a relatively good condition.

The aspects of the art that was employed for the making of the mosaics are dramatic expression and monastic simplicity. A large part of the surface of the painting is made of gold and as light reflects upon it, it highlights the transcendence of images and shapes creating the impression that they move to a more sublime and spiritual world. Their exceptional quality in combination with the fact that they constitute the work of artists who associated themselves with the most renowned ateliers of Constantinople ranks them among the most significant works of Byzantine art. 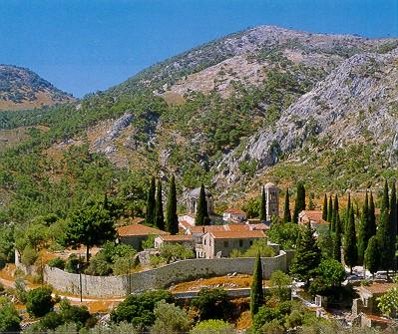