The Cave of Agio Galas is one of the two caves that you can visit on Chios Island (the other one is that of Olympi). It is essentially made of two caves, one above the other. The lower one stretches over a large area and has an impressive stone adornment. The above one is shallow and the church of Agiogalousaina is built at its start.

Visitors will certainly be amazed by the the cave chambers, decorated with stalactite complexes.

Morphologically, it is a long corridor of 220m length forming meanders while creating wide, spacious rooms and labyrinth-like chambers. Humidity and drop flow is strong while the temperature varies.

Excavations conducted in the two lower caves in 1938 by the British School of Archaeology and in 2004 by Greek Paleoanthropology - Speleology Agency, brought to light important findings dating from the Middle and Late Neolithic period (6th and 5th millennium BC ). The cave also contained scattered remnants of all subsequent periods, as well as food remains, mostly bones, fish and shells.

Many of the bones found were from bears, leopards, wild boars and deers, animals that no longer live on the island. 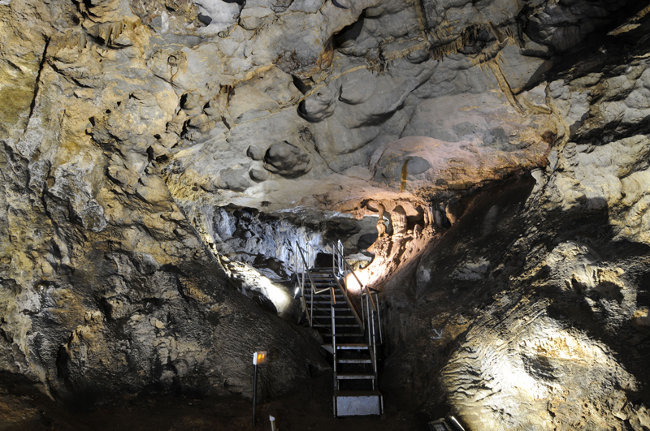